Three groups of students have attended the Spaceport America Cup in the past five years.  The 2018 and 2019 teams, led by mechanical engineering student Monique Embury, traveled to Las Cruces, NM to compete in the Spaceport America Cup. Pictured is the team, with the 12-foot rocket designed and built on campus. The solid-fuel motor they used, an AeroTech N-3300, propelled the 65-pound rocket just over 14,000 feet in the air at 700 miles per hour. Each year the teams learn more about the rocket and its systems and make improvements. A new rocket has been built by the 2022 team, led by Terry Sjolander, and was launched in competition summer 2022.

Engineering Tools for Use in Space

Students were tasked to design their tool according to detailed specifications, create a prototype and present their projects to NASA scientists and engineers. The WSU Vancouver team was invited to Johnson Space Center in Houston where NASA divers tested the student-built prototype in NASA’s Neutral Buoyancy Lab, a 6.2-million gallon pool used to train astronauts and test equipment in low gravity.

NanoEngineering for Medicine and Biology 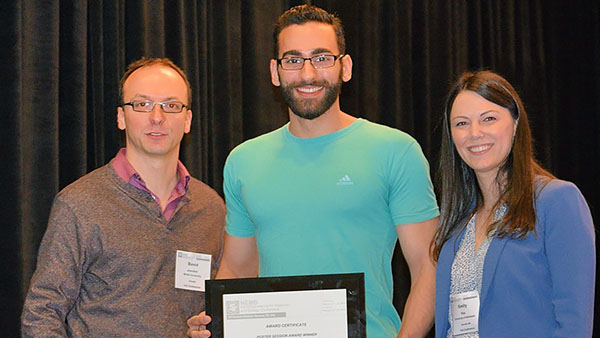 Darius Saadat, a graduate student in Mechanical Engineering at WSU Vancouver, took 3rd place in the poster competition at the 2016 ASME NanoEngineering for Medicine and Biology Conference in Houston, TX. Participants submitted more than 70 abstracts for the competition with 10 finalists selected based on visual presentation, technical content and delivery. The finalists gave 3-minute presentations on their research in the second round.

A brief description of Saadat’s research:

"To provide some background, the cells in our body eject a wide variety of materials such as waste products and proteins, as well as bits and pieces of DNA — many of these products are present and circulating in our blood. This means that a small sample of blood could be carrying a wealth of information as to what is occurring throughout the entire body. On that note, recent research has found that those aforementioned pieces of DNA could be used to diagnose cancer in a way that is faster, simpler and more cost effective. This is where we step in since we are trying to develop a device capable of capturing fragments of DNA from various samples such as blood. In theory, the approach we are investigating in our lab can be refined to the point that we would be able to capture/detect an individual type of DNA fragment — and thus, by extension, any disease that may be associated with those fragments.” 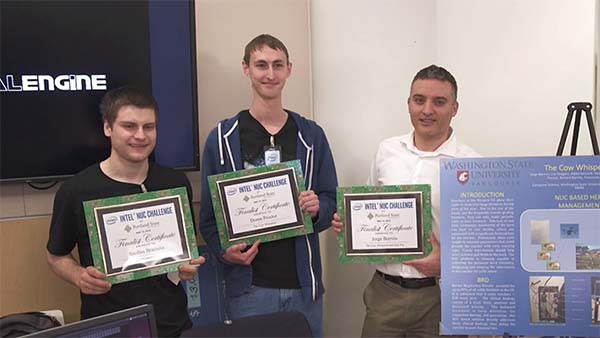 The winning team developed a way ranchers could use the NUC platform to monitor a herd of cattle in remote grazing locations in real time. By detecting core body temperature through a battery-powered animal collar, the system can relay early warning signs of sickness via a drone powered by an NUC computer, enabling ranchers to act promptly to stop disease from spreading.

The Cow Whisperer team, led by Jorge Berrios, was one of two teams from WSU Vancouver selected among 10 finalists to build prototypes of their solutions.